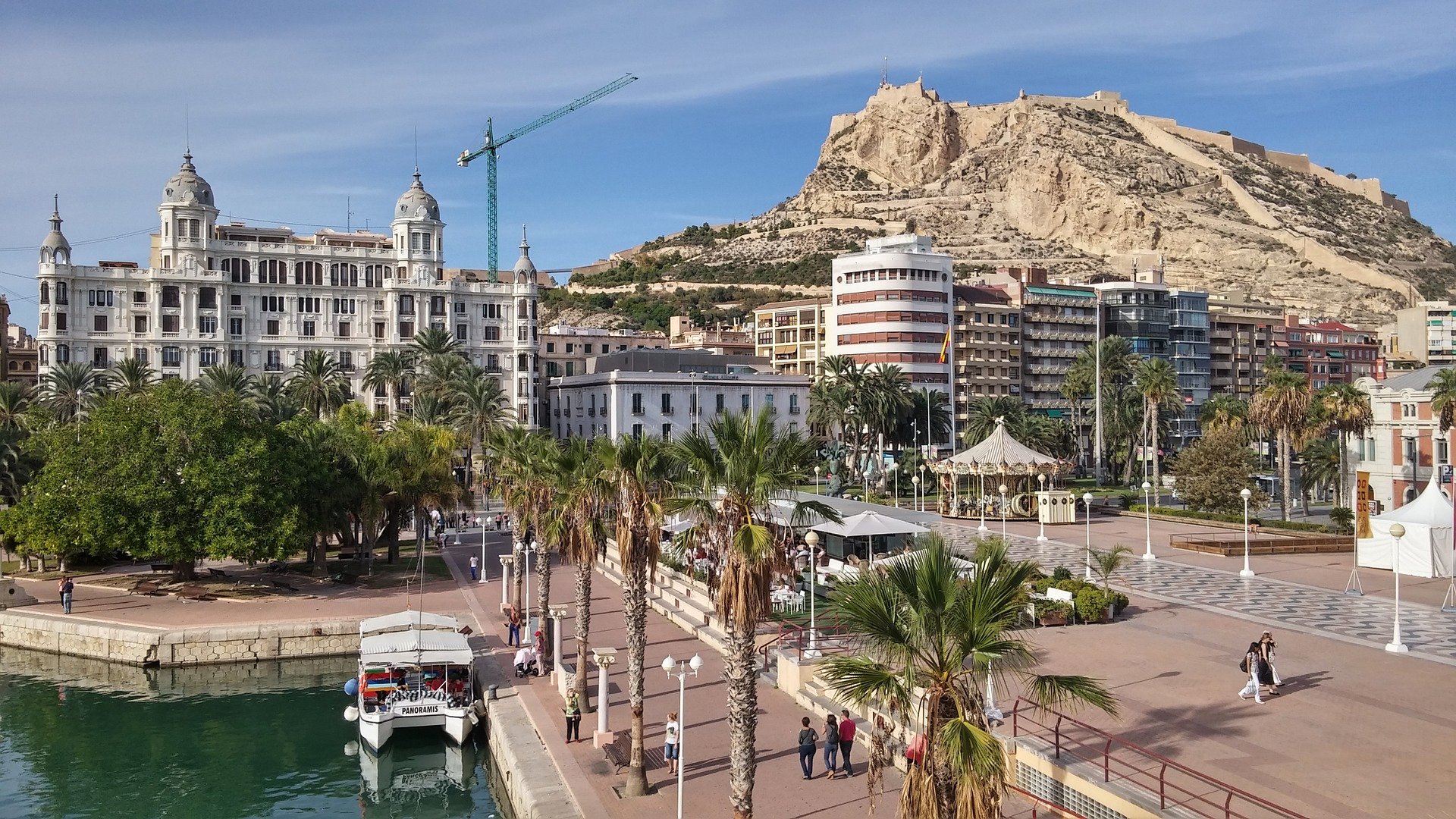 Alicante is a beautiful Spanish port city , located in the province of the same name in the southern part of the Autonomous Community of Valencia.

The port city of Alicante currently has around 331,750 inhabitants . Alicante is one of the fastest-growing cities in Spain due to migration from abroad. The local economy is based mainly on tourism. 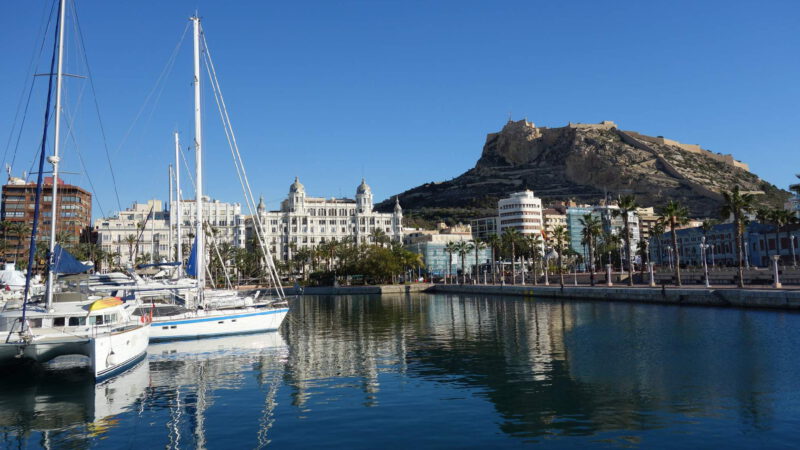 Alicante was founded by the ancient Romans . Then there were the Arab rulers and then the Catholic rulers, who brought the city under the administration of the Kingdom of Valencia.

Grab a towel and head to the beach

Alicante is a particularly picturesque seaside resort , which attracts to swim in the beautiful blue sea. The main attractions here are especially beautiful beaches with fine sand and beach bars. 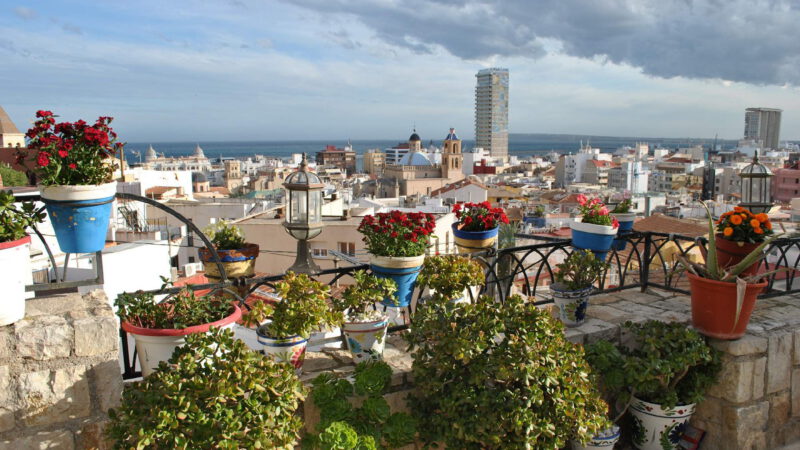 The most famous and most popular beach is Playa de San Juan , located seven kilometers from the city center. The famous beach is easily reached by local bus or tram. However, if you don’t want to travel anywhere, try the city’s Postiguet or Urbanova beach, located directly in the city. 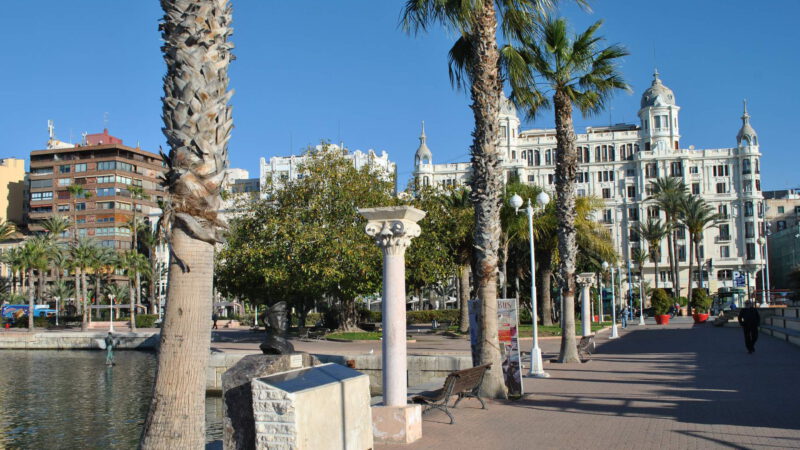 In Alicante, you can pamper your tongue. Here you can choose from a large number of delicious Mediterranean dishes prepared with fresh fish, seafood, olive oil, delicious rice, fresh fruit, and vegetables.

Especially rice dishes are famous in this city, so among other things, you must definitely try the local delicious paella, which even comes directly from the city. 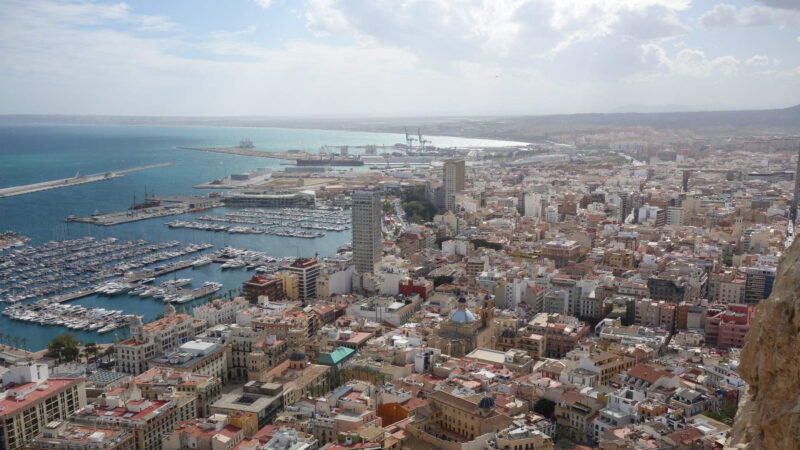 Alicante is not only great swimming in the sea and sunbathing on the beach, but also a noisy and exuberant nightlife. If you enjoy dancing and drinking great alcoholic cocktails, you will definitely not be disappointed in Alicante. After a good dinner, you can head to one of the many evening discos and have fun until the morning. 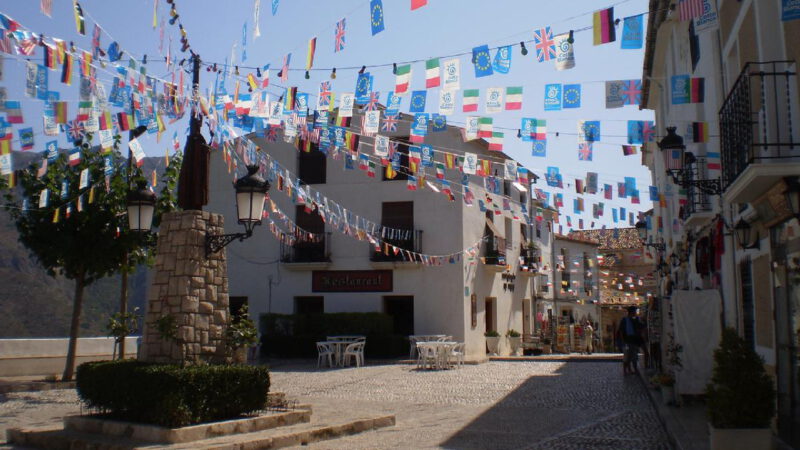 Alicante has an international airport and a large train station, with regular services to Valencia and Barcelona. You can then move around the city with reliable trams. 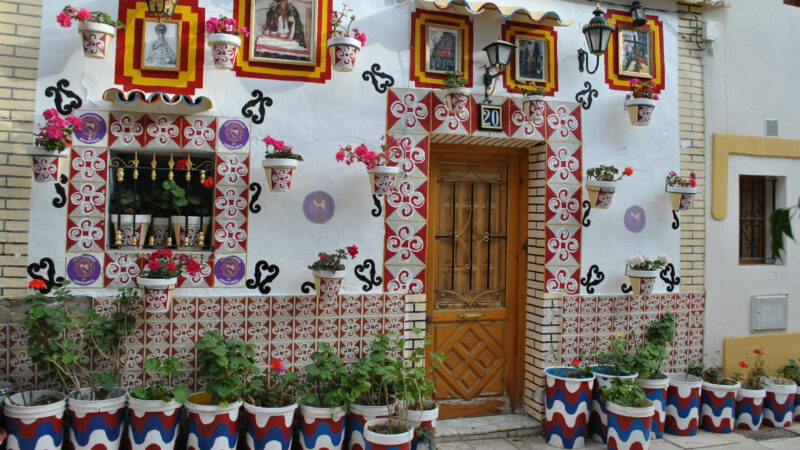 Sports activities here are mainly of a water nature. A highly sought-after water attraction is a fast jet ski ride or a large inflatable boat towed by a boat. 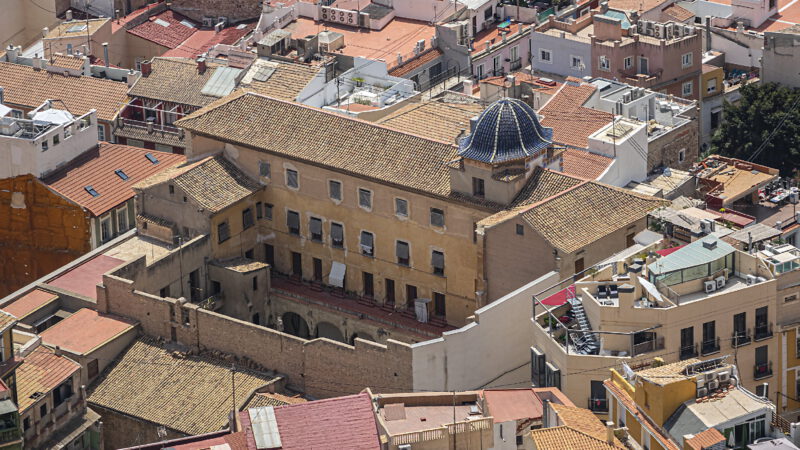 “Las Hogueras” Festival in a Romantic Sunset over Alicante

Alicante is a lively and vibrant city that really lives in the summer months. A great opportunity to soak up the local summer atmosphere is to take part in the local traditional “Las Hogueras” festival, which is full of noisy fireworks, a colorful parade, and paper effigies that are set on fire at the very end of the event.

Sights and attractions of Alicante

In Alicante you will find nice historic buildings , several museums , and above all beautiful beaches and promenades.

Here is a list of some of the most interesting sights of the sunny city in the south of Spain. 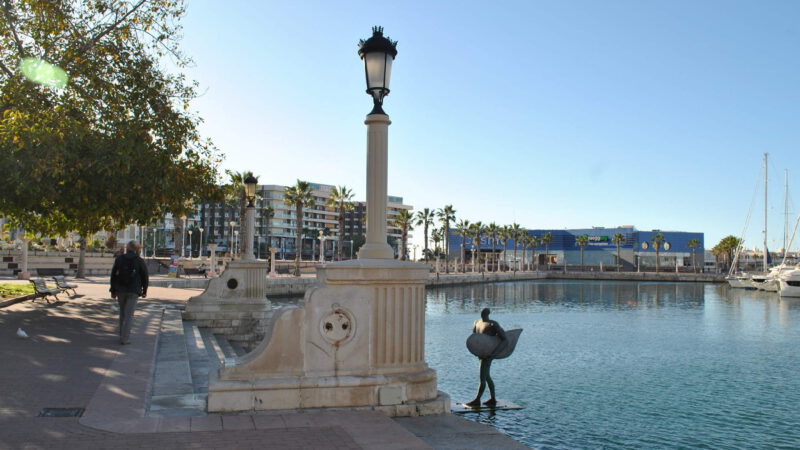 The main monument of Alicante is the beautiful medieval castle of Saint Barbara, located in the heart of Alicante. It is a massive castle that proudly rises on the highest hill of the city called Mount Benacantil . The castle in its current form has been here since the 13th century. 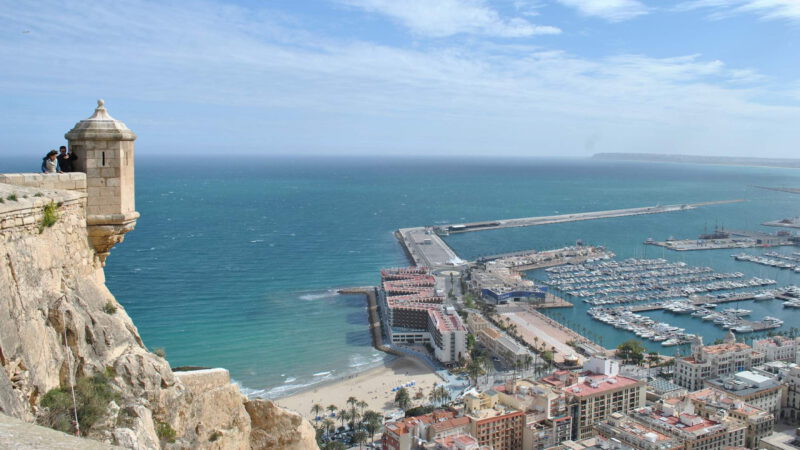 For fans of museum collections, here is a tip for the Archaeological Museum , which boasts not only a beautiful historic building but also very old exhibits and artifacts. In 2004, the museum received the prestigious title of the best museum in Europe.

La Explanada de España is the living heart of all of Alicante. It is the busiest artery of the city, where everything essential takes place. The graceful promenade is lined with heavy palm trees, so the whole place looks like a long-lost paradise. The street is made of colorful tiles that visualize the sea waves, so a walk along the promenade will be a truly extraordinary experience for you. 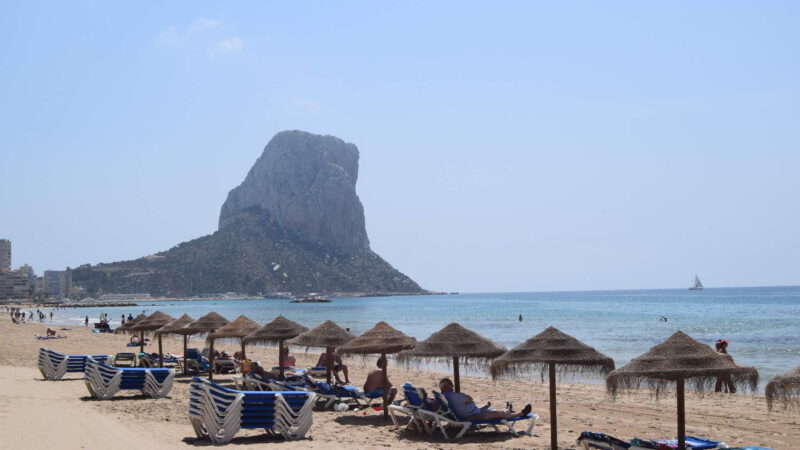 Gothic Basilica of the Virgin Mary

The Stunning Basilica of the Virgin Mary is over 500 years old. A magnificent sanctuary of the Roman Catholic Church, where you can stop for a moment and enjoy the majestic beauty of Gothic art. The basilica is a typical example of airy Gothic architecture that rises high. In addition, the interior of the basilica is richly decorated and thanks to the two tall towers, you will find the temple in Alicante very easily. 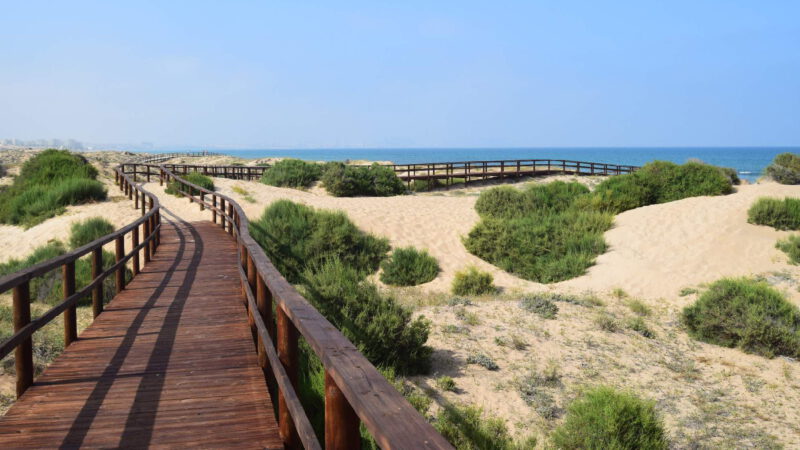 The island of Tabarca is a grateful tip for a short trip from the city. It is a nearby rocky island , worth a short visit. Boats leave for the island of Tabarca from the port of Alicante at any time. The beautiful small island is famous as a marine reserve, so it is not surprising that tourists from a wide area come here for the rich and colorful underwater life. 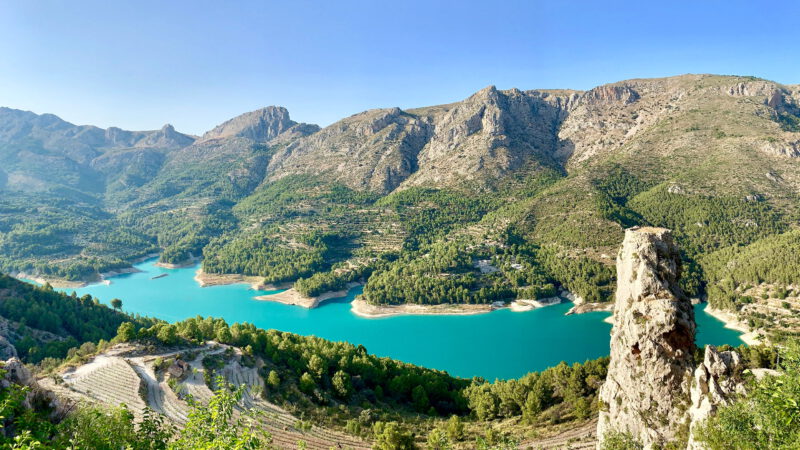 Another tip for a trip is the Canelobre Cave, which is about 20 kilometers from Alicante. It is a prehistoric cave that is well hidden inland . It is also the deepest and longest cave complex in all of Spain. The caves were created several million years ago and are now captivating tourists from all over the world with their unique appearance.

Finally, one tip for market lovers. In 1912, a main market was built on the remains that surrounded the historic city center. It is a building with modernist elements, which at first glance looks like a sacral building. The market building also includes a large dome, La Rotonda. 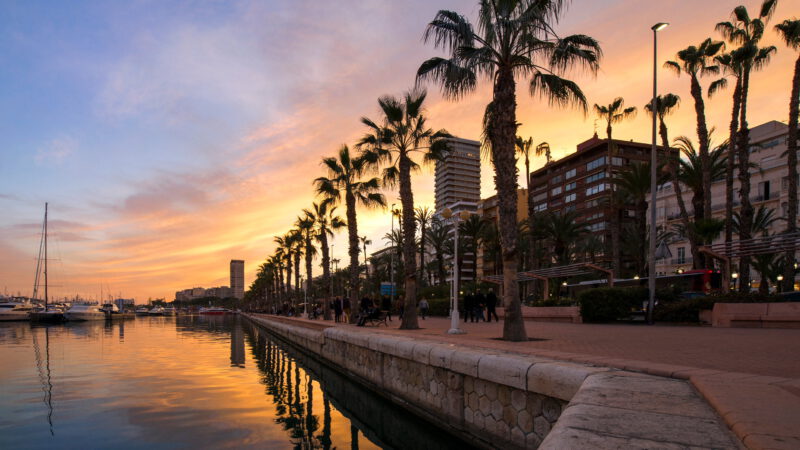 Alicante is a beautiful city that has a lot to offer. It’s not as crowded as Barcelona or Valencia , but maybe that’s why it’s all the more interesting. Lots of sights, culture, great cuisine, and of course the sea. Directly in the city, you will find many kilometers of beautiful beaches , for example in the area of ​​La Cantera in the north, where you will not even feel like in a big city. We can only recommend a visit to Valencia from the bottom of our hearts.